On Fish, Rocks, and Going With the Flow 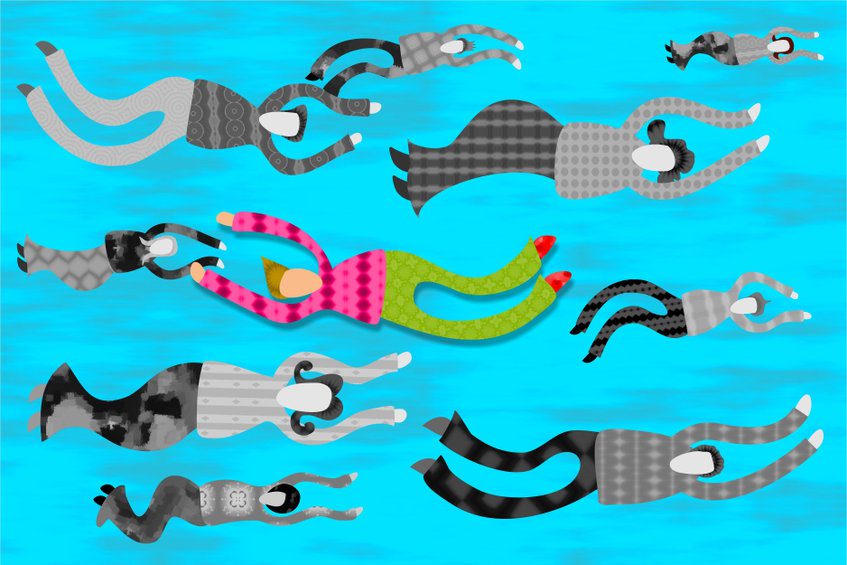 Most weekends, I get up before dawn to walk in a green space in my neighborhood. Our subdivision sits on what used to be a farm, so there’s a lovely large field with paths leading down to a wooded area by the river. It’s incredible that so few people use the space, although I’m not exactly unhappy to have it all to myself.

A few Saturdays ago as I perched on my customary boulder, I noticed something unusual in a shallow section of water flowing over another large, flat rock: dozens of tiny fish, no more than an inch long, swimming furiously against the current. Going absolutely nowhere. 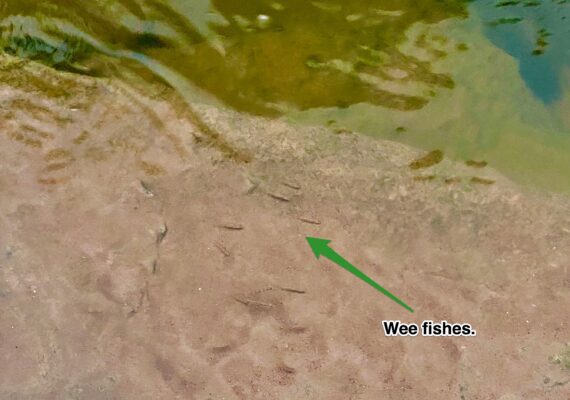 Can y’all see them?

Why were they working so hard to head the wrong way? I mean, we’re not talking salmon at spawning time here, and they were too small to travel a long distance anyway. I confess I became a bit obsessed, watching them. They just wouldn’t stop – it went on for like, 20 minutes, maybe longer. Ever so often, one would venture a bit too far away from the shallows and get swept away. Silly fish. What was going on?

Upon closer observation, I finally figured it out – they weren’t really swimming. I mean, they were, but that wasn’t the objective. The fish were feeding on what I suppose must have been microscopic algae on the rock. Had they turned the other direction to swim with the flow of the river, there’s no way they could have held their places long enough to suck up a single bite. They were, in effect, going against the the prevailing current to get what they needed.

Sometimes when we see someone doing something that seems totally contradictory to what makes sense, what “goes with the flow,” we’re tempted to tell them how they should do it. A colleague might share how they bounce from task to unrelated task all day at work, or how they check email or respond to Slack every ten minutes. Maybe before we even ponder whether or not they’re successful, we’re all-in with the advice:

“You know you really ought to time block, and group similar tasks together, like I do. You’re making things harder for yourself. And quit checking your messages so much! It’s got to be wreaking havoc with your productivity.”

Never mind that 1. they’ve had the top sales numbers for six months in a row, and 2. they didn’t ask you in the first place.

Or maybe we don’t trust our own flow/counterflow, comparing it to someone else’s experience. We read something some organizing or productivity guru wrote and figure it must be gospel, even if our intuition is screaming that it makes no sense for us. In my book, when I’m describing the L.E.S.S. method, I talk about keeping the items you sort into a “Relocate” container together until you’re ready to move them to other rooms all at once. In my mind, going about it this way keeps someone from wandering into another potential organizing area and getting distracted. But I’ve had a few people challenge me on that premise, because moving to and fro, putting stuff away as they go helps them work with restless energy. The movement from space to space supports them in staying on track, and it totally works.

It’s good to be challenged.

Those fish followed instinct too, of course. No one told them, “Hey, Fishy Friends, you should be swimming the other way if you want to get anywhere in this life.” Even if someone had, I doubt they would have listened. Maybe the takeaway is that sometimes it’s necessary to push the contrary way to get what’s needed, regardless of how it looks to innocent bystanders (or rock-sitters).

Where are the spaces and places in your life that benefit from resistance to the natural, or expected flow of things? 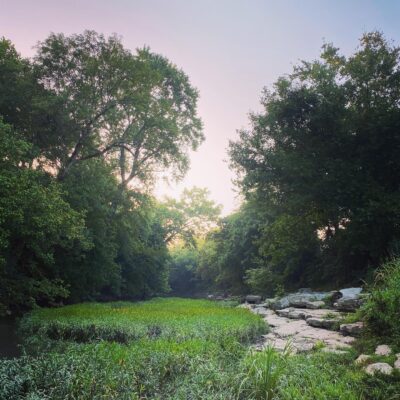 My happy place at the river at dawn. You might find some more pretty shots over on Instagram @saraorganizes. 😉